Please help support Exeter CND and our campaigning work by clicking the "Donate" button to make a donation securely online via PayPal:

We will be uploading more archive materials so do check back in a few months. If you have any old papers, magazines or photographs of Exeter CND activities over the years, please do get in touch: info@exetercnd.org 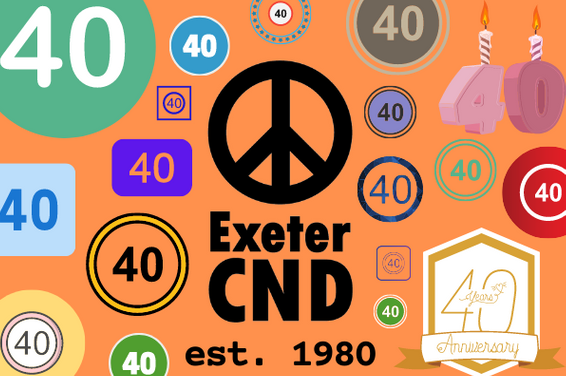 Exeter CND was founded on 27th October 1980 at a meeting of 160 people in what was then known as St George's Hall in Exeter (now called the Exeter Corn Exchange). This was the day after a large national CND demonstration in Trafalgar Square under the banner "Protest and Survive" that was calling on the Government to abandon Britain's nuclear weapons and to work for nuclear disarmament. That demo was the first mass protest organised by CND since the 1960s. Prior to the establishment of Exeter CND as an central group, there were already existing ward area CND groups within the city.

Here are a couple of reports on that national CND demo of 26th October 1980:

At that meeting in Exeter, a provisional organisation was adopted, and after an intensive recruiting campaign, a formal constitution was adopted at a General Meeting on 26th January 1981. By that time, membership of Exeter CND had grown to around 600 people, and continued to grow, reaching an all-time peak in 1984 of nearly 2500 people. Forty years later, we're still here, and even though our membership is a little more modest in size now, we're still campaigning for peace and for global nuclear disarmament.

We've started a project to catalogue our archive materials and make them available online, and you can find the first documents using the links below:

In December 1980, Exeter CND researched and produced 40,000 copies of a leaflet entitled "Nuclear War and You" and volunteers hand-delivered them to every house in Exeter and in many of the surrounding villages.

The first Annual General Meeting of Exeter CND was held on 26th January 1981 and at that meeting the first constitution was adopted.

Throughout 1981, newsletters were produced monthly (although we are sadly missing a few copies from our records):

We are missing the ECND newsletters for Jan-March 1982, but from then onwards we have more or less a complete record, and we will be uploading them here.

We also have copies of newsletters from other groups, some of which are here: